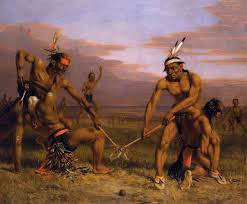 Lacrosse is a sport created by the Native Americans and is the oldest American sport that was played before the Europeans discovered the New World.  The sport uniquely embodies brotherhood because the Native Americans trained for battle by playing lacrosse. Interestingly, the first Europeans to encounter lacrosse were French Jesuit missionaries who, at first, opposed lacrosse because they viewed it as a violent game. The French Jesuit missionaries believed that lacrosse represented a religion they sought to eradicate.  Many other Europeans were intrigued by the game and played it often with the Native Americans.

Over time, the game of lacrosse became increasingly attractive to many European players, and the French Jesuits eventually accepted the sport and also began playing with the Native Americans.  The game continued to grow in popularity despite strong opposition but was eventually banned in some areas. Because Americans placed many Native Americans on reservations isolating the sport to small areas in the growing United States, lacrosse became less well known for a period of time. Regardless, lacrosse has survived as a popular and continually growing sport.  In 2001, Major League Lacrosse was established in response to its dramatic growth.

To this sport’s ongoing resurgence, the Crusaders are adding their own hearty contribution.  This year, the Strake Jesuit lacrosse team made the Texas High School Lacrosse League (THSLL) Division I playoffs, super regionals stage for the first time.  The Crusaders were the underdog for the entire season with little expectation for seeing a playoff run. With all odds against them, the Crusaders shocked many Texas teams beating cross town rival Memorial, defeating Katy lacrosse powerhouse Seven Lakes, and almost beating private school rival Kinkaid. The Crusaders faced intense adversity with many D1 Texas Lacrosse rankings casting doubt on the Crusaders’ talent and giving teams the Crusaders had beaten higher rankings.  Using the doubt as motivation, the Crusaders secured playoff status with victories over Memorial again in the 1st round and then Kingwood.

The Crusaders eventually lost a hard fought game against Dripping Springs in the Texas super regionals. Although the season did not end with a victory on the field, the team bonded into a brotherhood that will never be forgotten.  Players who initially saw each other as only teammates finally saw each other as brothers.  The Jesuit brotherhood is reflected in the game of lacrosse because it teaches how to be Men for Others on and off the field.