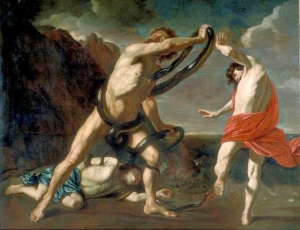 At Strake Jesuit, Greek & Roman Mythology is an interdisciplinary social studies elective, taught by Mr. White from the Foreign Language Department. The course focuses on mythological stories and concepts as well as historical context for how the myths originated. Students will learn about specific stories, myths, gods and goddesses, demigods, mythological creatures, and what they all reflect of the cultures in which they emerged.

The class is co-ed, containing students from both Strake Jesuit and St. Agnes, and is a single-semester course. Students mostly take notes on their iPads and other devices during class during lectures and discussions to prepare for future assessments.

I sat in on a couple of their classes to observe what the class is like. I found a balanced blend of lecture and student participation. Mr. White noticeably has a very deep knowledge of everything there is to know about Greek and Roman mythology and is passionate about the subject, phrasing everything in such entertaining vernacular that is easy to understand. He keeps students engaged and interested.

Mr. White provides many anecdotes and personal stories relating directly to the material and mythology presented, incorporates pictures of ancient art that demonstrates the topic (and even some of his dog), and uses physical examples of certain things—even bringing armor for students to try on.

Students who are interested in history, fantasy, or mythology would love this course as it is both interesting and informative on all things to do with mythology. So if you like mythology, history, or an entertaining and humorous course, Greek and Roman Mythology is definitely for you.

Sign up for one semester, and it will fulfill half of a Social Studies credit, which is especially useful for seniors who could use it for half of their Social Studies elective for their final year.