Posted on February 27, 2018 by magisstrakejesuit 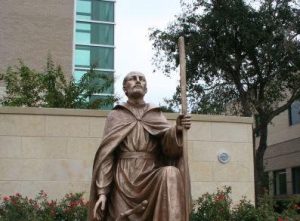 On January 11th and 12th, Strake Jesuit split one regular bell schedule into two days—days 4A and 4B. Day 4A had four out of seven classes while day 4b had the other three classes, and both days had early dismissal.

Many students wondered why this jarring change occurred.

Mr. Norkus, Jesuit’s Assistant Principal for Academics, gave some insight into this event, saying, “We contracted with a company called Independent School Management (ISM), which is one of the leading consulting company for private schools when it comes to scheduling. We teamed up with St. Agnes to bring ISM in and on Friday, January 12th, we had a 4 hour joint faculty meeting to talk about their suggestions.”

The reasoning behind the two shortened days was to give ISM a full day of scheduling to observe (Day 4), while also delegating time for faculty and staff meetings after the abbreviated school days. The faculty meetings were held primarily to discuss the different possibilities regarding ISM’s scheduling suggestions.

Some students might be skeptical of longer periods, as extended classes could push the limits of their attention spans, and even 45 minutes of a class can be hard to get through.

However, many stressed students who are craving a break might be excited to know that, according to Mr. Norkus, “All of their recommendations included an activity period or community time [daily], in which you would be able to spend time away from classes.”

Therefore, the primary shared qualities that every schedule change would have would be longer classes, more free time each day, and alternating days for every class.

Some would argue that such changes could confuse students, and many would rather keep the current schedule than have to adjust to something new so suddenly. Some also don’t  want to lose having that one class every day that they can look forward to.

But there are benefits. With five or fewer classes in each individual school day, students would have multiple days to do homework assignments for certain classes and would not have to feel responsible for seven classes of daily homework. This change would alleviate common conundrums often encountered by Strake Jesuit students, such as having several tests and quizzes in a single day on top of other homework assignments or essays.

While there are several possibilities regarding the future of the Strake Jesuit schedule, nothing is set in stone. Mr. Norkus stated that “Whether or not we are changing the schedule is still up in the air. There’s an option to change for next year and the coming years, but it is not certain.”

Mr. Norkus added, “Our priorities when analyzing our schedule include more deeply living out our Jesuit, Catholic mission; examining student and faculty quality of life; and preparing our students for college.”