Posted on March 6, 2017 by magisstrakejesuit 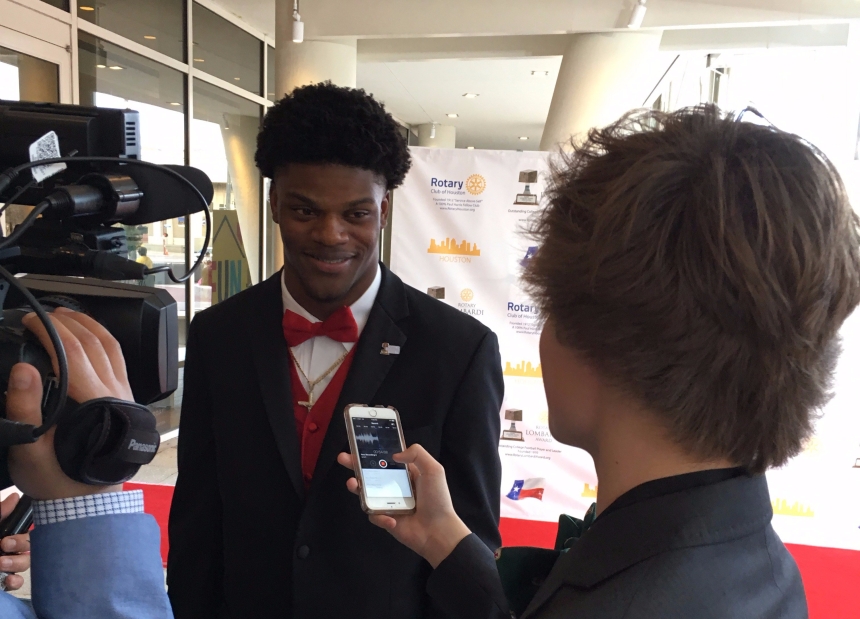 On a night where a Hollywood-style red carpet met big-time college athletics, top stars of this past college football season arrived at the Hobby Center in downtown Houston on February 11th for the Lombardi Award ceremony. This annual event hosted by the Rotary Club of Houston is dedicated to the fight to end cancer. The Lombardi Award is presented annually presented to college football’s most outstanding player who exemplifies the values and discipline of Hall of Fame coach Vince Lombardi, who was a cancer victim and arguably the greatest coach in NFL history.

The four finalists this year included Myles Garrett, defensive lineman of Texas A&M; Jonathan Allen, a defensive end from Alabama; and Lamar Jackson, Heisman Trophy winning quarterback of Louisville.  Defensive specialist, Jabrill Peppers of Michigan, was likewise a finalist for the award, but due to a scheduling conflict, he was unable to attend.

Myles Garrett was the first to walk the red carpet and appear before the local media, including this reporter. I was able to ask him what was so appealing to him about Texas A&M, knowing that he had received many scholarship offers: “It was an SEC School,” he replied.  “So, I knew that it was going to be one of the best schools in the nation.  A great education for whatever major I chose.”  An important element of his college selection was how the geographically desirable it was: “I could also stay close to home and see my family.”  When asked what was the most important factor to him about where he plays at the next level, he stated: “It matters if I’m the first pick or not. That’s where I want to go.”  Many current NFL draft reports show Garrett as being the likely top pick in the 2017 NFL Draft.

The second player to stroll the red carpet was Alabama star, Jonathan Allen.  I had the opportunity to ask him what it is about Coach Saban that makes star athletes like himself want to play for him. He responded: “Just the way he carries himself and has the business atmosphere; and how he has been able to improve guy’s year in and year out, and just bring the best out of ‘em”.  Then he went on to say, “Guys that play under Coach Saban tend to have longevity in the NFL.”   His connection to his coach seemed even greater on an emotional basis.  “Personally, I love to play for Coach Saban,” Allen told us.

The final nominee on the red carpet was the talented quarterback of Louisville, Lamar Jackson.  Following his sensational year on the field, he brought home the Heisman Trophy in December.  “You know, it’s a fun experience,” Jackson stating the obvious, “Just to be here with great guys, just to be a nominee for a great award.  It’s an achievement that a lot of people want to reach, and I’m just honored to be here.” To change up the questioning a little, I asked him if he was aware of social media entries claiming he looks like a cross between NBA superstars Russell Westbrook and Jimmy Butler, and what he thought about it. He laughed and told me, “Probably the hair — but I don’t really look like them.”

The award ceremony was televised locally and hosted by Houston TV sports personality Spencer Tillman.  In addition to this year’s contestants, the production featured Houston Mayor, Sylvester Turner; the reigning Miss Texas, Nancy Gonzalez; the grandson of Vince Lombardi; and former NFL great and Super Bowl champion, Keith Jackson.  Famed NCAA national championship coach and ESPN personality Lou Holtz also took the stage as a presenter and offered humorous comments.  The night’s award winner, Jonathan Allen of Alabama, was heartily congratulated by his fellow nominees and took the stage to grasp the block of granite award.  He exuded class and sincerity as he made his remarks to an appreciative audience.

The recipients of the money raised — M.D. Anderson Cancer Center, Texas Children’s Hospital Cancer Center, and the American Cancer Society, each received a generous donation and were the real winners of the evening.