Posted on December 14, 2016 by magisstrakejesuit 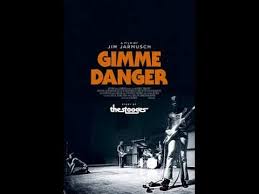 Gimme Danger is a documentary from independent filmmaker Jim Jarmusch chronicling the anarchic rise, fall, and reunion of the musical quartet Stooges. The film is a retrospective account of the wild antics and influence of the band, detailing the band’s outsider and provocateur status amidst the counterculture revolution in the late 1960s and their longstanding image as the godfathers of punk.

The Stooges were a rock band from Ann Arbor, Michigan founded by singer Iggy Pop, guitarist Ron Asheton, guitarist Scott Asheton, and bassist Dave Alexander. Known for the wild antics of Iggy Pop, the band is widely regarded as progenitors for punk, the genre and aesthetic as a whole. The film begins with the humble beginnings of Jim Osterberg (Iggy Pop) and his early forays in rock bands before meeting the Asheton brothers and Dave Alexander. After the formation of the Stooges, the film begins a fast-paced recounting of the band’s early years, their hedonistic lifestyle, and the production of their first and second album, along with detailing their status as outsiders among outsiders in the 1960s as they clashed with hippie culture. After the release of their first two albums, the film recounts their breakup and their reunion in Berlin organized by David Bowie to their sporadic success in the 70s before the release of their magnum opus, Raw Power (of which the title of the movie, Gimme Danger, is a song on the album). The film not only appeals to fans of the Stooges, but moviegoers in general as it provides a detailed and capivating look on a certainly interesting band. People unaware of the Stooges will surely be interested in them after seeing Iggy Pop writhe around stage like an angry baboon, while also satisfying fans of the band who came to watch a great documentary on a great band.