Posted on December 16, 2015 by magisstrakejesuit 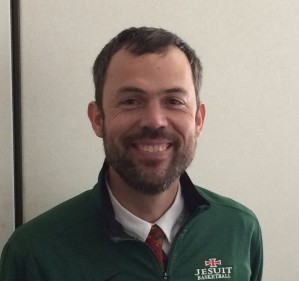 Mr. Baskin started his teacher career at Strake Jesuit this year. He is currently teaching Physics and Chemistry.

Mr. Baskin graduated from Waxahachie High School. After high school, Coach Baskin went to the Naval Academy, where he majored in Physics. He then served in the Navy for 12 years, as a C­2 pilot and a flight instructor. Mr. Baskin said he carried people and supplies from one aircraft carrier to another. He said he went to places like Hawaii, South Korea, and Thailand.

Mr. Baskin is the Freshman Green Coach for basketball and an assistant for varsity. He played basketball in high school and tried to walk on to the Navy Basketball team but couldn’t and became the manager.

Mr. Baskin has a rich family like He considers his older brother his role model and is engaged to Stephanie Oliver, who is in medical school right now. They are planning to get married in San Diego in March, 2016.

Mr. Baskin said “Strake is my first school, and I could not have chosen a better school.” He loves Strake Jesuit because of “the atmosphere it has that always encourages kids to learn and become better people.” He says so far his favorite experience at our school is the food, especially lasagna, and helping kids learn. He pointed out, “Everyone here is really nice and helpful. I have not struggled with this transition because of the accepting community.” We hope Mr. Baskin calls Strake Jesuit the home for his teaching and coaching career for years to come.