Posted on February 19, 2015 by magisstrakejesuit 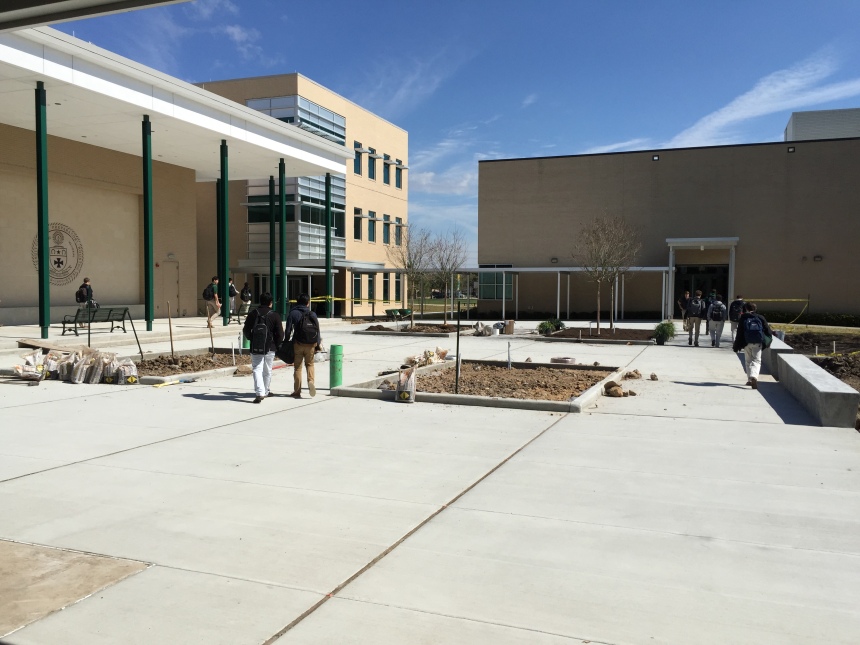 The wait is nearly over for the STEM patio: the new area is scheduled to be completed by March 1. Mr. Dave Muras, the Director of Operations, explained to me exactly what is happening with the site and what we should expect. The new area is a two-part addition. It will serve as both a patio with some benches to compensate the Dining Hall lunchtime overflow and as a large green space that will add onto the total green space in the center of campus. This new area will serve as an extension of the Dining Hall Patio that gives students even more options to spend their free time on campus.

Mr. Muras explained that the addition of the new patio was not originally in the plans for the STEM Building. When the 400 Building space opened up this fall, the administration had to determine the best use of the space and when to complete the project after considering their concerns about disrupting the campus and the flow of the school day. The decision was made to start the patio and new green space when the administration came to a consensus that opening up the campus in this area was the best use of the space. However, with the onset of the Open House this past Fall and with the expanse of dirt where the 400 Building once stood, the project needed a short-term solution to correct the eye-sore. Ultimately, the grassput in just before Open House was meant to make the area more appealing before the final plan could be implemented. Now, we are all seeing this plan in action as the patio and the green space are almost completed.

Whether or not you eat lunch outside, this new area is certainly a positive addition to the campus. Not only does it correct some of the growing problems with respect to seating in the Dining Hall at lunchtime, but it also cleans up some of the clutter on campus. None of the buildings crowd each other anymore, and many students can finally begin to notice some intricacies of the buildings that were harder to notice with the 400 Building in the middle of things.

The new patio and green space are signs of good things to come in terms of campus improvements. Mr. Muras said that the administration is constantly reviewing the campus areas and seeks to continue to create beautiful areas that everyone can use.

Whether it’s the new breezeway or the new fields along Gessner, we can all come to the conclusion that Strake Jesuit is growing and changing every day to adapt to our needs. Hopefully you all can find the time to enjoy the new green space and patio area. Maybe eat lunch outside every once and a while before Houston heats up for the summer.