Scotland Votes “No” On Independence

Posted on September 29, 2014 by magisstrakejesuit 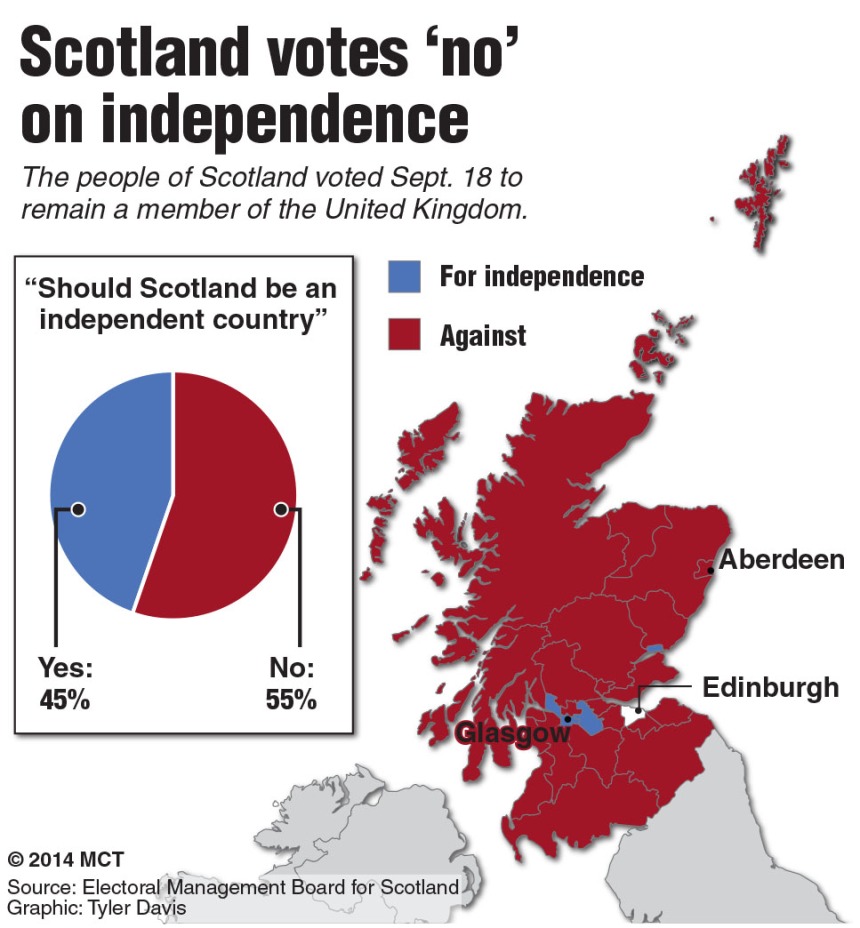 On September 18, Scottish citizens voted against a referendum which would have dissolved a union with England, letting Scotland become an independant country for the first time since 1707.

In 2012, the UK prime minister, David Cameron, signed an agreement stating that the Scottish Parliament could hold a referendum on independence. In order to increase the voter turnout, the Scottish Parliament actually lowered the voting age from 18 to 16. Many “No” voters didn’t like this change because it would possibly sway the vote in favor of the “Yes” campaign.

The Yes Scotland campaign for Scottish independence was led by Alex Salmond. Scotland, which has offshore oil and natural gas, believed they could control their resources better as an independant nation. Salmond has since resigned from leading the Scottish National Party.

The Better Together campaign, which was one of the main groups that wanted Scotland to stay in the union, stated that being in the UK was the “best of both worlds.” Scotland had their own parliament, which would be able to make local decisions, representing the local citizens the most, and would benefit from being part of a larger economy. Scoland would have access to more jobs and trade opportunities within the UK, as well as security from the UK’s armed forces.

One of the main reasons for 55% of Scotland’s citizens to vote “No” was the amount of things that Scottish citizens were unsure about. Economy, defense, energy, and membership in the EU were not definitively answered, leaving Scottish citizens unsure of how they would work in an independant Scotland.

Even though Scotland still remains in the United Kingdom, the vote was not without benefits. Scotland can expect more power in governing themselves, and will be able to make more decisions without the say of the British government. There are several places across the world that are attempting to gain independence, and Scotland has shown that getting a vote on independence, and finding a diplomatic solution, is possible.

Even though it remains part of the United Kingdom, Scotland may end up being better together with England.