Posted on September 3, 2014 by magisstrakejesuit

The start of the school year brings about many different feelings among the returning students and faculty: joy, nostalgia and sleep deprivation among them. But for the freshmen, nervousness and excitement dominate. Every student likely can recall his first day at Strake Jesuit and the major transition from middle school to a college preparatory school. Luckily, the Crusader Crew program is in place to help freshmen ease into Jesuit culture and life, to remedy the nervousness and engage the excitement.

“Crusader Crew helps freshman better understand Jesuit life and culture. In doing so, the program seeks to help new students throughout their freshman year and inform the freshmen what they need to be successful at Strake Jesuit,” co-moderator Mr. John Fahy explains.

A three year veteran of the program, Mr. Fahy has worked with Ms. Lynn Veazey and Mr. Michael Patrick to improve Crusader Crew from its beginning a few years ago to the present day.

As upperclassman have noticed, this year’s Freshman Orientation was radically different from any previous years. One big reason for this was the implementation of the House System. Armed with experience of  past Crusader Crew Freshman Orientation, Mr. Fahy was also assisted by the newly formed Advisory Council and first year faculty member and new co-moderator Mr. Patrick in the redesigning of the program.

“My first impression of the House System was that it was like Harry Potter,” freshman Blake Terrell of Gonzaga House says.

The idea of the House System stemmed not only from its success in other schools around the world, but also from the members of Crusader Crew Advisory Council. Made up of returning Crew Leaders from the Class of 2015, the Council was responsible for the naming of the houses (Xavier, Bellarmine, Regis, and Gonzaga) as well as the House mascots.

The Houses “become the center of the freshman orientation experience and will continue to be the center of their interaction with Crusader Crew for the course of the year,” said Mr. Fahy. Each of the four houses has twenty-five leaders and seventy freshmen, and freshmen are encouraged to stay involved with the program with the use of a points competition. The House with the most points at the end of the year will gain honor and glory with their names emblazoned on the Crusader Helmet, Sword and Shield for one year that will be displayed for all to see. 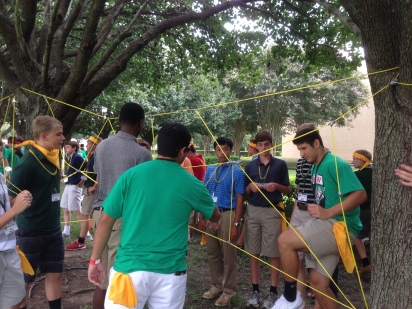 Crusader Crew Leaders Christian Hernandez (Left) and Camden Andarsio (Right) help their freshman House configure the best path through the spiderweb, a team-building exercise during the 2014 Freshman Orientation. Photo: MAGIS
As Tony Busa ’15, senior member of the Advisory Council, explains, “Initially, the big ideas came through the Advisory Council’s brainstorming sessions, but at the Crew Leader Camp we had brain storming sessions with all the attendees on many aspects of campus that were aimed at making the school better  not just for the freshman but for everyone”.

In addition to Mr. Fahy and the Advisory Council, Mr. Patrick helped in shaping the new look and feel of Crusader Crew and the Freshman Orientation. A graduate of Texas A&M, Mr. Patrick was heavily involved in Fish Camp, an organization formed, much like Crusader Crew, to welcome incoming freshmen into the traditions of Texas A&M. One of the most famous activity of the camp is the Yell Practice which Mr. Patrick sought to incorporate to the Freshman Orientation.

“I really enjoyed how much the freshman bought into the House System and got excited and participated in the yells,” he explained.

First year Crew Leader Alan Grothues recalled his experiences in the mini-yell practice: “My favorite part was by far getting to pump up the freshman as orientation started. We taught them cheers, got them yelling, and I completely lost my voice from the high-intensity hype. It was fantastic!”

Along with the yells, the Houses competed with each other in various activities ranging from dodgeball to Super Smash Bros. tournaments. “Dodgeball was definitely my favorite part of orientation” said freshman Erik Torning of Xavier House. However, probably the most famous moment of all was the blindfold half court shot (see below). Originally intended as a prank, Freshman Colton “Buckets” Marks of Xavier House’s incredible shot remains one of the crowning moments of the entire 2014 Freshman Orientation.

If you want to help improve school spirit, be more involved at Jesuit, or just have fun while mentoring the freshman, Crusader Crew is the place for you. Look for applications next semester and for further questions, talk to Mr. Fahy, Mr. Patrick or any current Crusader Crew Leader.